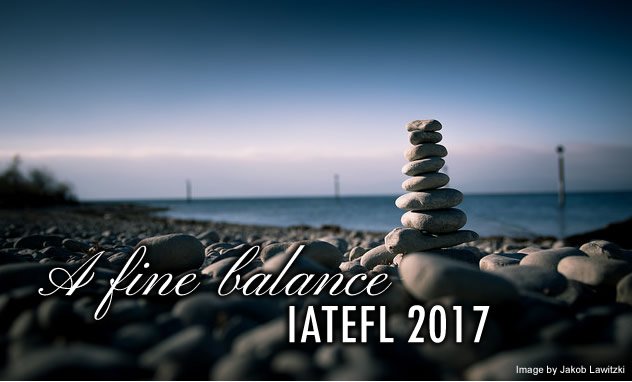 IATEFL's (International Association of Teachers of English as a Foreign Language) International Annual Conference and Exhibition was held in Glasgow in early April and I had the opportunity this year of attending for the first time. Over four days 500 or more talks, workshops and symposiums were held as well as smaller get-togethers of interest groups. Not doing anything by halves,  I had also decided to participate by giving a presentation along with my colleague Anna Hasper about communities of practice as well as attend the YLSig (Young Learners Special Interest Group) day that took place before the main conference.

Everyone has their way of dealing with such a big conference. Thousands of people attended from absolutely everywhere. It's inspiring to feel part of such a global practice as a teacher and compare notes with people from India, China, or Russia or even see people from your own home country and catch up with what's happening there.

I applied the approach that "less was more". I carefully selected talks to attend and gave myself space in between to ruminate alone with a coffee or catch up with colleagues. I had little hope of hanging on to and making effective use of anything if I packed each day with back to back sessions and meetings.

What was my “takeaway”? 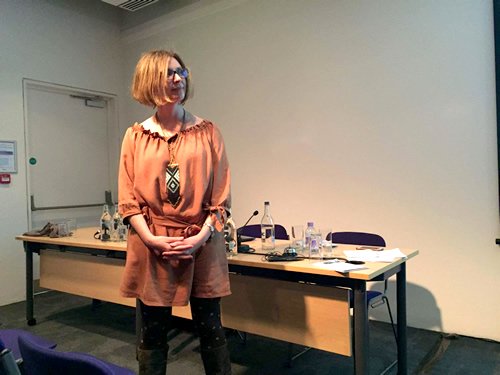 Me listening to my colleague Anna as we start our session.

An overarching theme of the YLSig day, and other talks I attended during the conference as well as conversations with colleagues, especially those involved with the Visual Arts Circle, was empathy. I would almost call them post-ELT conversations, in the sense that we were beyond the nuts and bolts of the “how” of teaching English. That isn’t to say that the investigation and application of effective language learning methods is unimportant and wasn’t happening. Of course it was. I am only saying that the IATEFL conversation I found myself taking part in was considering the role of the English language, language learning and teachers in a changing political landscape for many of us at home and abroad.

People who become English teachers are, by default I would argue, people with a certain level of empathy. They are people who have travelled, or already speak other languages or who have been through the journey of learning English itself. Led by Dr. Joan Kang Shin, we discussed in the YLSig the process through which one becomes aware of other cultures and the stages of accepting difference –from being ethno-centric to ethno-relative and the swings and roundabouts that can have.

“Ethnocentrism is an indicator of centricity around our own cultural perspective, meaning we evaluate others based on what we experience and what we were brought up with. This is a narrow mindset that does not lend itself to overcoming cultural gaps or learning how to interact and communicate well with people from different cultures. The goal for those who wish to become culturally competent is to move from an ethno-centrist to an ethno-relativist perspective in which our perspective on culture is relative to the situations we find ourselves in.” - Lynne Putz 2014 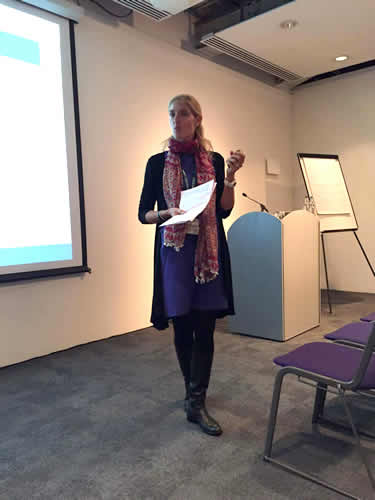 Anna Hasper gets our session started.

The day I realised my mother had her own life.

Our earliest experience of ethnocentrism I would argue, is up until the point when we first realise our parents or caregivers have separate lives to us. Until I was relatively old, my mother was really only an extension of myself. She was a person who cleaned and moved around me. She made my clothes, she took me to get new shoes. She put out washing a lot and cooked. She put plasters on my knees and mafde stuff better. She got angry sometimes, and stressed and tired. It would be managed. But did I ever consider who she was really? What did she feel and why? I enjoyed making her happy and doing nice things for her. But who was this mysterious person?

We are returning again to an international climate of wall building. Given this, many teachers are considering what our role is in the fine balance of honouring and responding to geo-local and cultural needs while making use of English as an international platform for dialogue and understanding.

No story about us without us.

The thread continued throughout the YLSig day and throughout the conference (or my version of the conference) with sessions by Carol Read, Kieran Donaghy, David Valente, Gail Ellis and Nayr Ibrahim that addressed issues of identity, empathy, values and “other”. David Valente challenged us to reflect on whether we were working with growth mindsets and embedding global values in our teaching and teacher development. While Gail Ellis and Nayr Ibrahim considered how teachers' views of children influence their teaching and teacher training and development.

How do we develop dialogues about global and international values, the rights of the individual, or the concept of who/what a child is, while at the same time acknowledging cultural difference? We aren’t all the same, our perspectives are different. I come from a background where Euro-centric and indigenous tribal perspectives simultaneously seem to clash, intersect and meld. The simple question of a person being an individual or part of a collective isn’t globally agreed.

Ethno-relativism calls us to consider at what point our persuasion to get people to see beyond themselves and consider another perspective smacks of pater/maternalism and when we can actually serve to do good. Does our desire to get people questioning still come from an ethnocentric point of view? Are we right? Are “they” “wrong”?

And so, we go back to those stages of recognizing “other”, stepping back if we find ourselves too often in the centre, and allowing another voice. In our session about communities of practice, I wanted to peel things back and reflect on the wider issue of what a community is.  If we want participants in our community to grow and become more effective at what they do, as leaders of that community, we need to develop ethno-relative skills, as well as geo-relative and person to person awareness. We need to then apply that to an understanding of how groups form and mature and our role as facilitators of change and growth. A fine balance it is.

[ssba-buttons]
Tags:ELTEmpathyEthnorelativismIATEFL2017YLSig
We use cookies on our website to give you the most relevant experience by remembering your preferences and repeat visits. By clicking “Accept All”, you consent to the use of ALL the cookies. However, you may visit "Cookie Settings" to provide a controlled consent.
Cookie SettingsAccept All
Manage consent