Well known author and teacher developer Jim Scrivener spoke to me in an interview a couple of years ago about focusing on where learning is happening. He claims that we devote  lot of time as teachers to almost ritualistic teaching acts to engage and entertain students. In this article I go on to explore this idea further. Games and “Gamification” are techniques and approaches we often use to hold our learners’ attention, but I argue that to really use “games” as teachers, we need to develop a deep awareness and knowledge of what play really is and how play in learning works.

What does a play state look, sound and feel like? Free play is an ideal learning environment. It is the deepest and oldest form of learning, and it is proven to be very effective. There is a growing voice of concern that somewhere in our enthusiasm for education ourselves and our children, we’ve taken out an important ingredient. So, lets talk about The Goonies, DeLorean Time Machines, wild gardens and Dungeons and Dragons shall we?

Having spent over a decade as resident English teaching expert in my wider family and school community in, I can’t count the number of times that people have asked me for advice about English language classes and options for their children.  I’ve given such classes myself, privately and through academies and seen many a tired face staring back at me over the years. Children have been marched, from the age that they can waddle, from daycare, to after school classes, to swimming, to judo, then homework and private tutors.  I’ve reassured many eight year old children, anxious over homework and exams, that I wasn’t going to add to the pressure (I hoped).

Stop the World. I want to get off.

When living in Seville, Spain I would retreat from all this relentless search for educative activities to an inner-city community garden/wild space that was the subject of my photography and visual work for over five years. I enjoyed the space for many reasons obvious to anyone who lives in an apartment in a densely populated inner city.

As a New Zealander born in the seventies, I was left to roam in spaces unfettered by fences and ruled by common sense. Alert the police, I was often unaccompanied by an adult. This community garden in Spain was the closest I had come to finding that space for my own children and myself, in a long time. The garden space also inspired a lot of thought about learning. It featured in my interview with Jim Scrivener in 2015, where I drew comparisons of watching where growth is happening in our learners, with the principles of Permaculture and wild tangled gardens.

In the early years of the garden, it was a delicious space of freedom and opportunity to climb stuff and generally scuff about and get dirty. As the garden became more popular as a place to play, more and more adult intervention made itself felt, with structures, rules and enclosed areas. It was still delightful and the opportunity to get dirty remained, but one felt less free.

The Goonies: Play and Learning 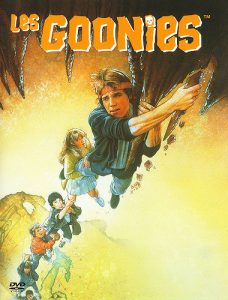 For those of you who don’t know, The Goonies is a 1985 adventure comedy directed by Richard Donner. The screenplay was written by Chris Columbus based on a story from Steven Spielberg. Let’s recap the film for a moment. A group of kids who live in the “Goon Docks” neighbourhood of a North American town, are trying to save their homes from demolition. In the process, they discover an old Spanish map that leads them on an adventure to find the long-lost fortune of One-Eyed Willy, a 17th-century pirate. The whole time they are chased by a family of criminals, who also want the treasure for themselves.

The key ingredient of The Goonies is that the kids are free to roam, with access to adults only when they require them, much like the recent series Stranger Things. There is a definite sense of whistful thinking in Stranger Things,  It has us all yearning for the freer days of the past.

In The Goonies, age isn’t as important as skills and what each has to offer the group. Lev Vygotsky would be proud to see his “Zone of Proximal Development” present where free age mixing is at work. The Goonies need to negotiate and work things out, as well as look out for each other with minimal intervention from adults. We would be hard pushed to find a gang of kids free to play beyond the safety of their well-fenced homes in many cultures today, let alone take on a gang of adults.

While the Goonies face a real-life situation, their success at tasks says a lot for their free time spent in play.

What is Play Really?

“Play is a concept that fills our minds with contradictions when we try to think deeply about it. Play is serious, yet not serious; trivial yet profound; imaginative and spontaneous, yet bound by rules and anchored in the real world. It is childish, yet underlies many of the greatest accomplishments of adults. From an evolutionary perspective, play is nature’s way of ensuring that children and other young mammals will learn what they must do to survive and do well.” (Gray, 2013)

Play is not about the action in itself, but the mental attitude toward that action. Play is self-chosen and self-directed which means of you can opt out of the game when you want.

With play, rules and structure are player-centred and often player-generated or adjusted. You need to be able to keep everyone happy or people start abandoning the game. In Spanish, there is a term “La cáscara de huevo” or the egg shell, meaning that the rules that apply to a more able-bodied player are adjusted to the abilities of the younger, less able player.

When there is a game with a team involved, play is different as Peter Gray argues in his book Free to Learn. There is usually a coach or other adult intervention and high stakes of winning and losing. There is an element of coercion at work. It is harder to opt out for example, and teams are not player-chosen. The focus on the means is part of getting to the objective of winning.

Play is About Process as Product

The process of the play is often more important to the players than the outcome. For example, in preparing and planning a fantasy scenario,the act of working out who has what skill, what role, and the discussion of details of certain characters can take up more time for the players than the actual enactment.

At this point we could bring up the role of gamification in language learning. Gamification is a about injecting a sense of competition either with oneself,  or in a team against others, in some aspect of learning. There are countless ELT games to be found to jazz up a lesson. They can be fun and engaging, but as Scrivener argues, we often place these elements into our lessons almost by default without deeper consideration of learning as the centre of our objectives. We’re almost there, we’ve got our eyes on the learner because we want to provide engaging lessons, but we’ve taken our eyes off the learning.

The competition element (the outcome) can take precedence over deep understanding which takes place when the process is the focus. In this sense again, while learners might be having fun, I question the play state/learn state that someone might be in when they play competitive games. Two people can be playing a match of tennis. One can be in a state of play and other is not. How do we know when one playing and the other not?

A Mind in a State of Play

Play is imaginative and removed from serious or real life. Play requires the player to be active and alert, but not stressed. The mind in a state of play is key. Studies with doctors and students in problem solving scenarios have found that participants who entered in a playful state of mind were better at finding a solution. Children have been found to solve logical problems when they have been presented in a playful context. These same conundrums weren’t able to be cracked in a serious context according to British researchers M. G. Dias an P.L Harris.

Play Can Have Mixed Motives

Play can be a mixture of motives. It’s not always play for play’s sake. There are many professions that depend on a state of play in order to reach a goal, for example a need for a creative solution to a problem. Artists, mathematicians, scientists, engineers and designers consciously or unconsciously utilise play. They find their greatest inventions and “aha!” moments in these states. Think of Doc in the film Back to the Future. Only a play state could have brought about the invention of the DeLorean time machine!

So, what is all of this telling us? That we all need a lot more time in free play. Our adult lives and childhoods are too dominated by structured time complete with objectives and outcomes. There is little time for the mind to wander, let alone the body and spirit.

The Sweet Spot: Finding a State of Play in The Classroom

Let’s now take this into the classroom. Do we approach language learning playfully? It’s difficult because the rules of play are already 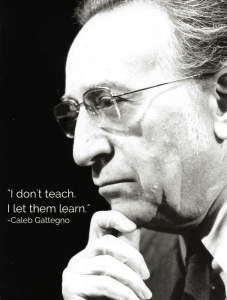 broken before we enter the classroom. Many of us are not there because we chose to be, we are part of a coercive schooling system. Even if we have made the choice, it may be as a means to an end and not for curiosity of the content itself. Finally, our mind state as learners is possibly far from playful. The context is serious.

In my many years of exam preparation classes (the culture of which in themselves were a cause of great concern to me as a language teacher and educator), I saw the effects of learners approaching problem solving and tasks in a goal driven, serious state of mind as opposed to a playful one. Even I myself was caught up in the drive to get everyone “through”.

We need to take a wider look at our learners and the pressures and structures that are governing them. What can we create in our classrooms that is different? I would consider recasting my classroom as a space apart, where I would find ways to create playful states, for myself as much as the learners. My lesson plan would be peppered with playful scenarios and situations for exploring language.

As I mentioned at the beginning, Scrivener talks about focusing on where learning is happening. I would add that as teachers we need to develop better awareness of what a play state looks like. To do that, first we have to familiarise ourselves with what a play state feels like when it is happening to us and welcoming more of it into our own lives and work. So, that said, a game of Dungeons and Dragons anyone?

If you are interested how play shapes learning, here is some further reading